“I worry about being found suffocated under a giant pile of leftover sock yarn.”

I Didn't Buy Any Yarn at Stitches It’s hard to explain Stitches to unindoctrinated. You can’t easily explain to your boss that in a mere two-hour’s drive you’re going to be in a land where picking up a skein of yarn, burying your face in it, and taking a big whiff is a perfectly excepted ritual before purchase. He’d think you were nuts. More nuts.

And I know you’re not going to believe me–not right off the bat anyway–but I didn’t buy any yarn at Stitches. Really, I didn’t.

I set out to do a modest bit of shopping. I wanted a nice pair of sock blockers and enough Cascade Greenland to make a sweater (that’s next in the sweater queue after the Obviously Not Impossible Un-Sweater Project). I came out with neither. But that’s not to say that I came home empty-handed.

Would it surprise you if I told you I spent most my money at Stitches on independent publishing endeavors? I know, very strange for someone like me (cough crow plug cough cough). I rounded a corner in the market place and met knitting royalty and superheroes side by side. The Knit Princess is a daily webcomic by Allison Sarnoff and Melody Moore. The strip is available free online, but she also has some snazzy books and swag for sale. You can’t borrow mine; I’m not done yet. And on the list of healthy obsessions I’ve picked up in the last couple of years, who would have thought I could combine comic books and knitwear together? Handknit Heroes to the rescue! Stephanie Bryant and Marc Olivent create this one and I’m thoroughly enjoying it. I met Stephanie right there at her booth, bought every volume she had and I’m watching the mailbox for the next one. 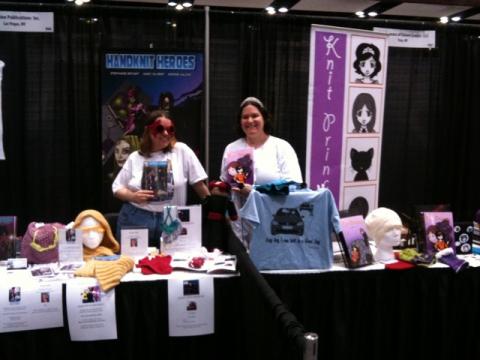 “So what does one do at a fiber festival?”
“I’m going to meet my knitting heroes.”
“...Do they have little knitted capes?”

I try not to geek out and go all fan girl over folks I admire but am not personally acquainted with – you know, the chance encounter with the actress in the coffee shop or what-have-you. They must get that all the time. There are times when it can’t be helped though. So I’m going to drop some names now because I met some full-on rock stars of the knitting world. 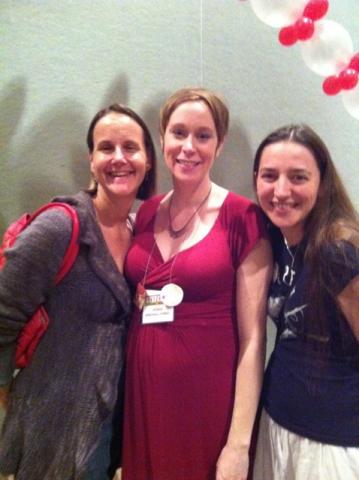 Ania65 and Stitchbug get a snap shot with Jess of Ravelry fame and glory. And check out the little Mini-Jess bump there. That’s one baby that will never lack for knit-wear. 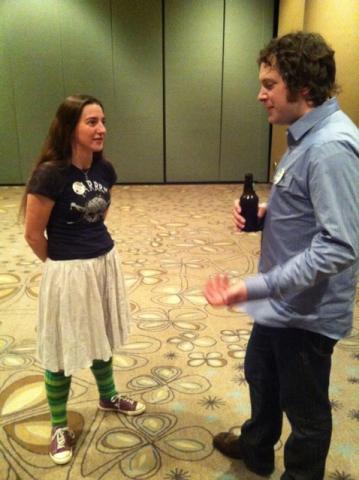 And I totally did the embarrassing fan girl thing here. But what can I say? What would you do if you met the guy who built Ravelry? You would corner him and tell him about everything you want in a Ravelry mobile site, wouldn’t you? Of course you would. 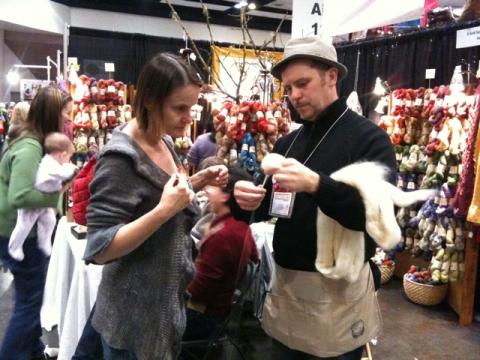 And speaking of heroes, here Ania65 gets a drop spindle lesson from WonderMike of FiberBeat, who hardly needs an introduction around these parts. Also, I just like to point out in a by-the-way kind of fashion, he likes my socks. [Squee!]

Other props to cool people, places, and things:
Can you believe it’s possible that there was a company that designs medieval and fantasy inspired knitwear and I didn’t know about it? There is. Ladies and gentlemen I present The Sanguine Gryphon. Bad. Ass. Stuff.

I’d also like to introduce you to Nifty Thrifty Dry Goods who sells some really unique ribbons and trims... and knows how to display them like the candy that they are.
Just because no balls of Greenland or sock blockers caught my fancy this time doesn’t mean I made it home from a market of that magnitude empty handed save for books. I made a few scores in fiberland. Plus, I won a nifty project bag from Purlescence Yarns, so thank you guys for that. 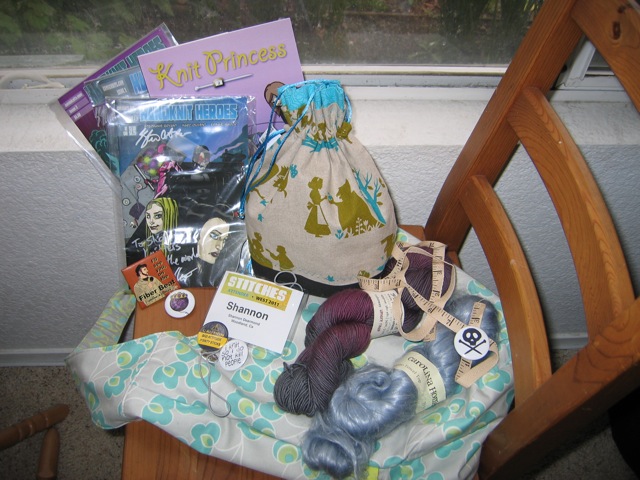 Well, not exactly. You see, that blue stuff there is roving (merino/tencel from Carolina Homespun). That’s pre-yarn. Potential yarn, if you will. Yarn to be. And the other thing? That’s not yarn. It’s sock yarn. Totally different. Sock yarn doesn’t count as stash, thus speaks the Yarn Harlot, so I didn’t buy yarn. And it’s Socks that Rock from Blue Moon Fiber Arts and who possibly goes to Stitches and doesn’t come home with Socks that Rocks, I ask you? Besides I already know exactly what I’m going to do with it and despite my tendencies to gravitate towards the same colorways over and over again, this one is so clearly distinct from all the other sock yarns I’ve ever had that clearly– 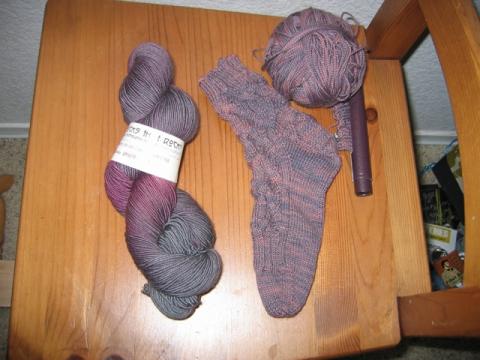 Except, possibly, some minor similarity to this Verb yarn that I have currently on the needles.

LOL...Thanks for the reminder about sock yarn...now 5 of the skeins that brought home with me (two from STR) don't count anymore! Funny thing about this post....there were big blank spots where pictures might have been....but weren't.